Rusa III of Urartu invades the Kingdom of Tumurri

Desperate to gain new supply routes, a beleaguered King Rusa III of Urartu, which has seen much of its territory ransacked by invading Kimmerians for decades and now facing a new threat from the South East by the Medes, attempts to take advantage of the civil unrest in Assyria, and makes an incursion into the Assyrian vassal state of Tumurri.


Unfortunately for Rusa, spies within his court have alerted General Asanni, the Assyrian Governor of a nearby Northern province, who quickly assembles a force to counter the Urartian threat.

This is a matched pair battle.


I deliberately altered the Assyrian composition to reflect that at this time, the Assyrian empire was undergoing a civil war and was overtaxed in trying to maintain its borders.


Here are the house rules I used:

(1) +1 to 4Ax and 4Bw when in close combat with any Sp (unless they are in bad going, or when assaulting or defending a city, fort, or camp).

(2) 3Ax and Ps may choose to either recoil a base depth or evade a full base width.

(3) Bw must shoot at a mounted target in their threat zone.


The game was played on a large board.


A BUA (city), three difficult hills, and a road make up the terrain. 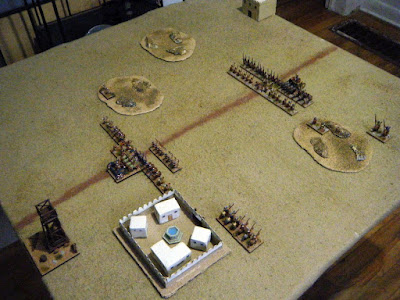 
Assyria: Asanni has placed his cav. on the right flank just in front of the city, and on the other flank, has placed some slingers in the difficult hills.  Behind a small screen of archers, the main line of the levy horde, provincial foot, and spear are placed just to the left of the city, with General Asanni in reserve behind the lone spear.

Urartu:  Rusa's front line consists of the horde in the center flanked by provincial foot (3Ax), with royal foot (4Ax), Rusa himself and the royal cavalry in reserve.  The Kimmerian horse archers lie far to the left flank. 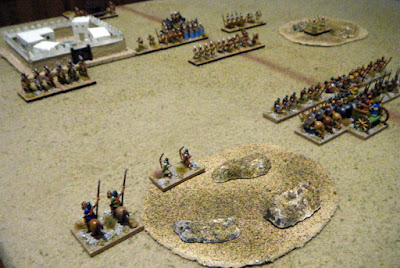 Click here
By mid morning Rusa has moved his main force towards the Assyrian line, while Asanni has moved the levy horde to fall in with the advancing archers. 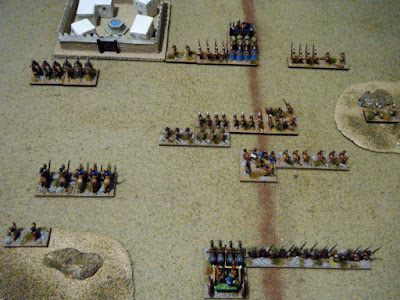 Click here
Approaching noon and the battle has truly begun, as Rusa sends part of his front line to engage the archers, while consolidating his left flank.  Has Asanni been caught out and is his reserve too far away to help out his front line? 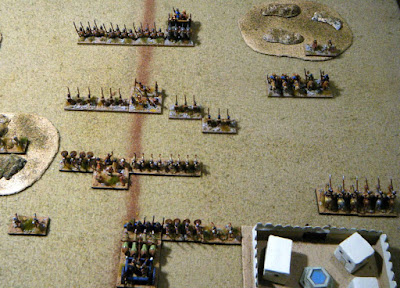 Click here
Not so fast Rusa!  After a fairly ineffective encounter between  the Assyrian archers and the Urartian provincial foot, Asanni brings his archers and levy horde back out of harm's way and bolsters the line with some of his own provincial foot.  Now it looks as if Rusa's front line is caught out. 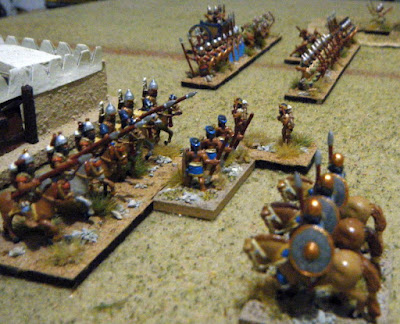 Click here
After a failed attempt to attack the Assyrian right flank, the defenders counter in order to finish off the isolated Urartian provincial foot. 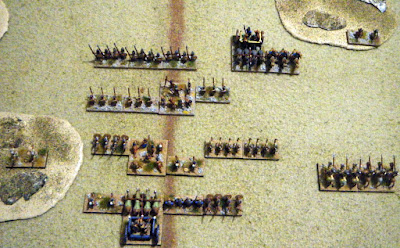 Click here
Feeling confident after dispathcing the Uarartian attack on their right flank, Asanni goes on the offensive and moves his front line foward.

Click here
By late afternoon and knowing time is running out, Rusa along with his royal cavalry, attack and eliminate a unit of archers.  The score is now 2-1 for the Assyrians.

Click here
Sensing an opportunity, Asanni rallies some of his force to take on Rusa directly. 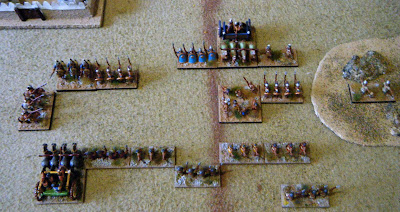 Click here
By early evening, the Assyrian attack on Rusa and his left flank was partially successful in eliminating the royal cav., but Rusa manages to regroup and also take out the other archers. Score now 3-2 for the Assyrians. 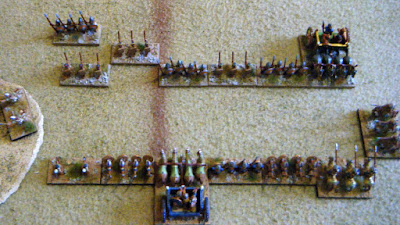 Click here
Aprroaching  sunset, and after the Assyrian levy horde has been seen off, both sides begin to form up their lines, with the reserves now plugging up holes.  The Assyrian slingers move to the edge of the difficult hills in order to freeze the nearby Urartian provincial foot.

Click here
With dusk approaching, Rusa maneuvers himself and some royal foot to isolate an Assyrian cav., while on the right flank engages the slingers in the hills, using another unit of royal foot providing a hard flank. 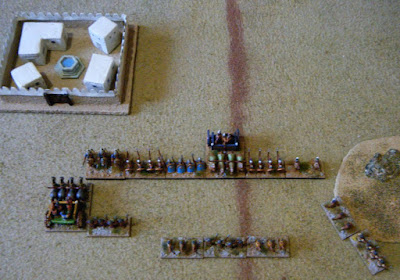 Click here
The Urartians manage to take out the slingers on the hill and Rusa plows through the Assyrian cav., resulting in General Asanni calling it a day and returning to his garrison along the plains in Northern Assyria.  Tumurri, is in the hands of Urartu again, as it was briefly with Rusa's grandfather, Arghisti II.

This is certainly a scenario I want to try again, specifically having Urartu invade the Northern border of Assyria during this period.  I would prefer however, to have them go up against the Zagros Highlanders (I/37b) representing the Kingdom of Tumurri with perhaps even having Assyrians as an ally contingent.

As for this battle, the way it was going at the beginning, it certainly looked like the Assyrians would win, and especially in light of using the Time of Day display, all the Assyrians needed to do was stay compact and let the Urartians come to them.  I do think that the initial success that the Assyrians had on their right flank might have made them over confident, because on their next turn they went on the offensive, yet for the most part kept their most powerful units in reserve, and they never got into the action, which I think was their downfall.

Thanks for taking a look!

Posted by Christopher Prest at 18:19 3 comments: